I recently watched Zak Ebrahim’s moving Ted Talk entitled "I am the son of a terrorist. Here's how I chose peace." In it he reveals that his father was a prominent, convicted American terrorist who had plotted to bomb tunnels, bridges and even the UN headquarters.  Zak grew up in what he referred to as a “bigoted household… raised to judge people on arbitrary measures like a person’s race or religion.”  As he grew and evolved on his life’s…

Our connection possibilities are just amazing. WE can unite and spread the good news and good works and good thoughts in a flash.

I am part of the BePeace Program out of Costa Rica.  Here we teach children in the schools to do the Heart Math practice and combine it with Non Violent Communication skills so they can be more coherent in there hearts and minds.

It is becoming popular in the U.S and has a…

Experiential learning program on working with youth for peace

I'm excited to introduce you all to PlayInTheWild.org. We offer full-immersion education in the principles and practices of nonviolence for youth, families, and educators. We define nonviolence as a lifelong commitment to seeing beyond differences, respecting all living things, and being of service to ourselves and others.
Of our four main programs, our upcoming Animator's Training is really unique. This…
Continue

I heard about this interesting program for violence reduction at the UMBC graduation ceremony yesterday. It's encouraging to see descriptions such as "cultural shift" and "making violence less sustainable". Check out more details at:…

“By defining a new industry as the ‘Violence Containment Industry,’ it is now possible to aggregate all expenditures related to the containment or consequences of violence. Our research indicates that when measured as a percentage of GDP this industry has expanded by 25% in the past ten years.”

In case you missed it, CBS has a video post of President Obama's speech at the Holocaust Museum yesterday to launch the interagency Atrocities Prevention Board. The APB…

I was browsing Google for news on "violence" today (something I have not done in quite some time) and came across this post from Robert Listenbee Jr., of the Defender Association of Philadphia. Mr. Listenbee writes about the ever-present issue of violence in our inner cities and the impact that violence has on children.

Rather than just being another in an endless…

Yes, it’s true! The National Peace Academy  – “where peacebuilders go to grow” – is three years old this month, and we are celebrating with the launch just this weekend of a brand new, sleek, spectacularly redesigned website. Check it out, and enjoy.

Growing Food Instead of Gangs in California

I thought I'd share an uplifting article that came through the internets this week. Creative, thoughtful, caring people have come up with an alternative to gang membership that benefits youth and the surrounding community by getting at-risk youth into agriculture. …

In the current issue of U.S. Catholic magazine, Maryann Cusimano Love discusses the role Catholics should be playing in peacebuilding worldwide. Ms. Love highlights the long history the followers of the Prince of Peace have had with hands-on community activism, how this should be…

This past week I witnessed two separate incidents of a mother slapping her small child.  In the first, I was standing in line at Old Navy.  Up ahead, a couple little kids were running around.  I don’t know what happened, some misbehavior I guess.  The mother chased after the little girl and scolded her with a hearty swat.  I recoiled…

I cried "the day the music died" (how many of you are old enough to remember that?), and I cried watching this demonstration of a heartland American community coming together in joy and harmony – a demonstration of a culture of peace.

From Board of Directors: The Faces of Peace.. Coming soon

We invite you to join with us as we excitedly celebrate the beginning of a new phase of our work towards manifesting a more peaceful culture!  What follows is a brief historical context – followed by a description of this new initiative – “The Faces of Peace,” in which we hope many of you will be active participants and proponents!! We will share some of the fruits we hope “The Faces of Peace” will bear.  We have been discussing this focal…

Revolutionary Evolution toward a Culture of Peace:Inside-Out, Bottom-Up, Topsy-Turvy

Earth quakes, tornadoes, tsunamis, floods, hurricanes, uprisings of the oppressed, nuclear meltdowns, global economic and financial collapse. Of historic proportions, all around the world, and all virtually in the blink of an eye.

And what of peace? In this revolutionarily evolutionary, topsy-turvy world turning upside down, what can peace mean? What is the role of peacebuilding in such a world? How do we go about it and make it practical in our daily lives, no matter who we are or…

A Beacon of Hope on the National Mall

I recently visited the United States Institute of Peace’s beautiful new home on our National Mall, and wanted to share with you how much the visit moved me. The new structure and new address do

justice to the importance of the Institute’s mission.

For years the Institute operated out of the National Restaurant building, but now the Institute boldly stands opposite the Lincoln Memorial – a shining symbol for peace at the heart of the nation’s Capital. …

The U.S. Peace Index is the first in a series of national peace indices that the Institute for Economics and Peace will be releasing to complement and build on its highly respected Global Peace Index. The aim is to further understand the types of environments that are associated with peace and its economic impacts at a more specific regional level.

For the first time, the U.S. Peace Index (USPI) ranks…

In February, the U.S. House voted to cut all funding for the United States Institute of Peace, which would essentially eliminate one of our government’s primary platforms for international peacebuilding.

Our good friend and partner, Chic Dambach, President of the Alliance for Peacebuilding, sends the… Continue

The Department of Peace Act is Reintroduced in the 112th Congress! 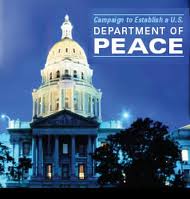 In a timely response to recent budget slashing that included eliminating financing for the U.S. Institute of… Continue

Report Released on Measuring Peace in the Media

The Institute for Economics and Peace and Media Tenor have released "Measuring Peace in the Media", the first study that takes a fact-based approach into understanding the…

The Institute for Economics and Peace has updated its series of downloadable teaching materials, the Building Blocks of Peace, that offer a fresh perspective to the issues surrounding global peace. A new module on peace and economics…